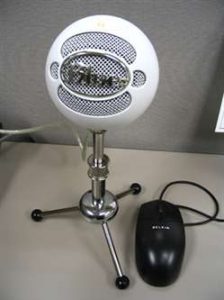 Blue’s orb shaped Snowball is just as much a piece of modern art as it is a microphone. Although the company is known for innovated designs, nothing breaks the mould as much as this one.

It’s about the size of a softball. The front of the device has a sexy, future-retro grill similar to what you’d find on a sports car. With the red LED light glowing you know it’s powered up and ready to pick up anything from voice overs and singing to guitar cabinets and acoustic instruments.

Looks aside, there are two really great advantages to picking up this mic instead of similarly priced USB microphones.

Firstly, it’s really cheap these days. If you look in the right place (hint: Amazon.com), you should be able to scoop the version with a white finish for less than $75. Gloss black and brushed aluminum finishes are also available for a little more.

Secondly, the Snowball offers a variety of recording modes making it useful for a wide range of applications. At the back of the unit there is a three position switch that allows you to select cardioid, cardioid with -10db PAD, and omnidirectional.

Cardioid – This is the default setting that podcasters and musicians alike use the most. Sound coming from directly in front of the mic is accepted. Background noise coming from the rear of the microphone is rejected.

Cardioid (-10db PAD) – This setting is aimed at musicians. Loud guitar cabinets and drums can sometime be tough to record without the signal clipping and thus distorting. The PAD lowers the level on the way in so proper gain is easier to achieve.

Omnidirectional – This setting captures sound in 360 degrees so essentially everything going on in the room can be heard. Omnidirectional recording can be very useful for ambiance. Listeners feel like they are in the same setting as the speakers.

The Snowball ships with everything you need to get started, which isn’t much. A USB cable and portable tripod stand is included in the box. Power is supplied via USB so you don’t have to worry about clumsy adapters. The stand is adequate for casual usage on a desk but can get pretty annoying to work with if you need to adjust the height very often. The neck has a tendency to slip down if you fail to tighten it with plenty of elbow grease.

Recording resolution is limited to 16-bit like most other USB mics out there. As a person that goes 24-bit whenever possible, I can’t help but be annoyed by this. It wouldn’t be surprising if the next generation of USB mics take on the 24-bit standard. Until then, 16-bit is perfect for podcasters that plan to stream in 16-bit MP3s anyhow but less than ideal for audiophile musicians.

I have to admit I was expecting tinny audio from such a humble device. Considering the price, the Snowball is actually a decent sounding little mic. Lows have a nice thud and highs are crisp. 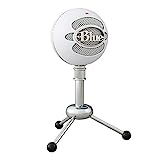 Blue’s Snowball provides a heck of a value for beginning podcasters and songwriters. However, let’s be clear, you won’t be getting the type of sound you need to make hit records.

If you are getting started but aren’t sure where the hobby will carry you, don’t hesitate to pick up the Snowball. Even if you decide to get a better main microphone down the road you’ll still find plenty of uses for it. Specifically, the omnidirectional function will keep you coming back for more.