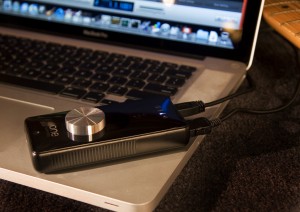 Technically the Apogee ONE can’t be thought of as a USB microphone; it isn’t a USB interface either. It is a hybrid of both.

A handful of years ago Apogee released an innovative, Mac-only interface called the Duet. It stood out due to its sleek form factor as well as its minimalist approach. Oh yeah, and it sounds amazing. For many singer-songwriter types, two channels are adequate for producing demo recordings and laying down overdub tracks. In my own travels, I found there was less to get in the way. There was no reason for me to lug around a rackmount unit with 16 channels when so much of the recording process requires only one or two sound sources. It added needless complication, making something I love less fun. In contrast, the Duet was super simple to use.

With ONE, Apogee brings the minimalism of Duet to a new extreme. This time there is one channel instead of two. Apogee hasn’t merely taken away however; ONE includes a built-in condenser microphone. Additionally you can connect either an unbalanced ¼” instrument line from your guitar or keyboard. If you want to make use of an external mic, there is a balanced XLR input.

So why is there a need for an interface with one channel and a built in mic? There are three reasons: convenience, simplicity and portability.

Starting with convenience, every second seems like an eternity when you have a great musical idea you wish to capture. This makes ONE a good sketchpad for songwriters. Portable digital recorders like the Zoom H4n are very useful for applications like this as well, but you’re better off with the Apogee if you have a laptop nearby. Portable recorders have really small displays and cryptic software.

Simplicity is off the charts. Like the Duet, ONE has a big honking knob similar in feel to the one on your stereo receiver. It of course controls volume plus more than you might imagine when it interacts with Maestro software. Press it to toggle between controlling mic/instrument gain level and headphone volume. Press and hold the knob for one second to enable mute; do the same to disable mute.

The portability factor is pretty self-evident. An outboard microphone isn’t necessary for offsite recording sessions. All you need to pack is your laptop, ONE and a USB cable. Setup is substantially quicker as well.

Now for the big question: how does it sound? Apogee has a bullet-proof reputation for sound quality. Even the bargain-priced Duet has sound comparable to their upper-end products like Ensemble. For this reason I went in expecting a lot from ONE. I wasn’t disappointed. With an external M-Audio Sputnik microphone attached, ONE sounded very similar to the tried and true Duet. The lows were pronounced and the highs in the speech were silky smooth. Of course, using a spectacular microphone helped quite a bit.

Next was a test to appraise the real worthiness of ONE. The internal microphone is of course crucial. Otherwise, you’d be just as well off with a small USB interface minus the mic. To produce a bed track, I plugged my Larrivee acoustic/electric guitar into the device and recorded a ditty of mine. Next, I mounted the ONE on a stand, set the levels, and recorded my vocals using the internal mic. The sound was of a fairly bright character as I anticipated; similar to the tone of a small-diaphram condenser microphone. The lows were evident as well so getting a smooth sound wasn’t tough at all with a little EQ magic. Overall, it is a highly usable entry-level mic. Once you outgrow it for critical applications, you can of course add an external large-diaphram condenser later.

I used GarageBand and a fair bit of Logic Pro during my tests. Apogee has designed ONE to work flawlessly with either application. This is an advantage of the ONE being a Mac-only device. I’d rather have a device that works really well on one platform rather than one that has clunky cross-platform software. 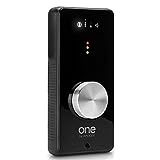 Apogee ONE Audio Interface for Mac

This is one of those rare products that I had a tough time criticising. The internal microphone can’t compare with a large-diaphragm condenser mic, but anyone expecting it to would be crazy. ONE gives you a very solid small-diaphram microphone sound. For the times you need a bigger sound, plug in an external mic and wail away.

The audio interface portion is based on the excellent Duet, so Apogee has left little to chance. At times I missed the extra channel of the Duet because I couldn’t record vocals and a scratch guitar track at once. Really, it depends on your needs. For overdubs on the fly, ONE is godsend.