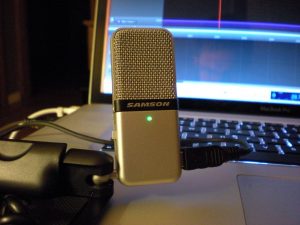 The Go Mic is part of a new breed of micro USB microphones that clip on the top of notebooks. It’s Samson’s answer to Blue’s Snowflake that was released before it.

An appealing aspect of this mic is it takes an already convenient concept: USB connectivity and combines it with ultimate portability and a utilitarian mounting scheme. It borrows from webcam model, which are now commonly built into laptops.

Positioned just above the monitor, the device is right in the sweet spot for VOIP calls, voice overs and podcasting. Alternatively you can attach the microphone stand adapter and get a more traditional setup going.

Web cams are notorious for poor quality in comparison to full-sized video cameras. The difference in quality between the Go Mic and a larger USB mics isn’t as pronounced. Speech is clear with a surprisingly full-bodied resonance. At the very least it blows away the internal mic in your Macbook Pro and the chintzy voice input on your Plantronics-style headset.

There are two switchable modes: cardioid and omni polar patterns. Cardioid grabs audio from directly in front of the mic and rejects sound from behind. Omni mode opens up full 360 degree recording so everything in the room can be heard. The possibility of the omni pattern seemed interesting but superfluous for a product that is primarily designed to sit on a laptop monitor. That impression was proven false when I used the Go Mic to interview someone. It really shines in this application because you can easily see the recording software at work without turning your head.

I can see this as being a very handy tool for a singer-songwriter. When writing music, it is helpful to quickly capture your ideas so you can remember how far you progressed. Think of it as an audio sketchpad. The quicker you can get setup, the better. For this reason it is a good alternative to a portable recorder from Tascam or Zoom. If you have a laptop handy, you’ll save money by going this route. In addition, you won’t have to deal with a cramped LCD screen and cryptic menus. Instead you can use your favourite DAW, such as Logic or Pro Tools.

There’s nothing worse than misunderstanding someone because they are using a crappy mic for VOIP. With the Go Mic, you’ll put the person at the other end at ease. This is especially welcome for business use as it ensures your directions are properly understood and therefore followed through correctly.

There are two inputs along the right side of the Go Mic. One mini-USB input for connecting to your computer and powering the device plus one headphone jack. The headphone output ensures direct monitoring with zero latency so there isn’t a lag disrupting your flow of speech.

Audio resolution is 16-bit/44.1kHz which is the current standard for USB mics. Frequency response is 20Hz – 18kHz so you’ll be able to capture pretty well anything within the limits of human hearing.

The mounting clip folds into the device, making the Go Mic highly portable and less prone to breakage. The mic can be angled in any way you like thanks to the metal joint attaching it to the clip. 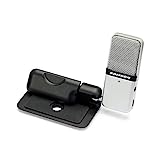 The Samson Go Mic is a very impressive little microphone for the price. I certainly wouldn’t use it for lead vocals for serious music recording. However, for music demos, voice overs and VOIP communications it is wonderfully convenient. The ability to just slap it on the top of your laptop screen ensures it gets used often.

I can’t recommend this over the Blue Snowflake as they are very similar in strength. In this case, it comes down to personal preference.